Last May 23 in the city of Curitiba-Brazil, a Capybara Parade entitled 'Capi Parade' was launched in the same format of Pascal Knapp’s CowParade, at Palladium Shopping Center, "The capybara is a symbol of Curitiba, besides being an extremely adaptable animal is often found in man-altered environments," says marketing manager Palladium, Maria Aparecida de Oliveira, who decided to show 8 capybaras in allusion to the eighth anniversary inauguration of Shopping.

According to Luiz Pagano, creator of 'Capybara Parade' movement, the public mobilization leading to decontamination of rivers in other cities of the world, such as the River Thames in London and the Han River in South Korea, has not happened in Brazil, 'Capybara Parade' was created in 2008, with the purpose of calling public attention to the indifference that public administrators have with Brazilian waters.

After the incident in which a dam holding back water from an iron ore burst near Mariana, in the state of Minas Gerais, and a few months left to the opening of Olympics, with the waters of the bay of Guanabara completely filthy, Brazilian authorities really shows the total ineptitude with regard to the basic care that the rivers and lakes of almost every Brazilian cities should have.

And it is in this scenario that the capybara surges as a hero. The world's largest rodent that lives in the Brazilian forests boldly appears swimming in rivers highly polluted cities of São Paulo and Rio de Janeiro and walking in groups along its banks.

“The Capybara is an ambassador of nature, dare to arrive in the cities and to swim in the rivers and lakes that we degrade, they seem to show us as a protest, that the rivers of our cities are no latrines, but spaces for living and beauty” says Luiz Pagano.

The exhibition at Palladium Mall in Curitiba, which began on May 23, goes up to June 5. On 4 and 5 June, the children who pass through the mall can paint mini plaster capybaras. "The intention of the Palladium is to aware the children about the preservation of nature, as well as providing a playful experience of painting," adds marketing manager.

To celebrate the World Environment Day, from 6 to 12 June. the ‘Capi Parade’ leaves in flock to the itinerant exhibition in various touristic sights of Curitiba, at the end of the action, the pieces will be donated and auctioned by the auctioneer Helcio Kronberg. The value fetched from the auction, the auctioneer's commission and the work of artists are donations and will be reversed in blankets to the campaign 'Donate Heat', of Curitiba performed by the Pro-Citizenship Institute and the Social Action Foundation ( FAS).


The event also includes the participations Brazilian celebrities, the 'Capybara Bi-articulated' had artistic intervention of architect and urban planner Jaime Lerner, in reference to the bus created by him, another wears a jersey of Brazilian soccer selection that will be autographed by Pelé, the king of football, after the auction, with a dedication to the winning bidder.
Postado por Luiz Pagano às 09:05 Nenhum comentário:

Promote your own Capybara Parade


Conceived in 2008 in Brazil, Capybara Parade is a project based on Pascal Knapp’s  CowParade, and aims to be an artistic, in form of protest march, with the purpose of decontaminate the Brazilian rivers, almost all Brazilian cities have polluted rivers and lakes, "in fact they are open air sewers" says Luiz Pagano, creator of Capybara Parade.

The capybara was chosen because it is the only large size animal of Brazilian fauna that dares to reach in urban areas and swimming in virtually dead waters.

“Brazilian rivers not toilets”, says Pagano “I love my country, but I envy cities that has beautiful rivers, where we can sail on boats, eat in floating restaurants and stroll through promenades alongside its banks, living spaces of tranquility and beauty”. Capybaras arrived and settled on the banks of the main rivers in Brazil, Rio Tiete and Pinheiros in São Paulo, in Tingüi and Barigui parks of Curitiba, at Lagoa Rodrigo de Freitas in Rio.

The Capybara Parade is free of copyright, and is also completely free with respect to the material used to make the CABAPs and artistic interventions as well as the selling price of the parts. Our only request is to do the closest capybara as possible to their original model in the pose that we suggest in order to standardize and organize their cause.

The Capybara Parade is free of copyright, and is also completely free with regard to their artistic interventions as well as the selling price of the pieces. Our only request is to do the closest capybara as possible to their original model in the pose that we suggest in order to standardize and organize their cause.

Those interested in participating in the project, just follow the reproduction instructions and start reproducing your CABAPs, apply his works on them and put them on sale.
CAPIVARA PARADE - CABAP 'BIG' 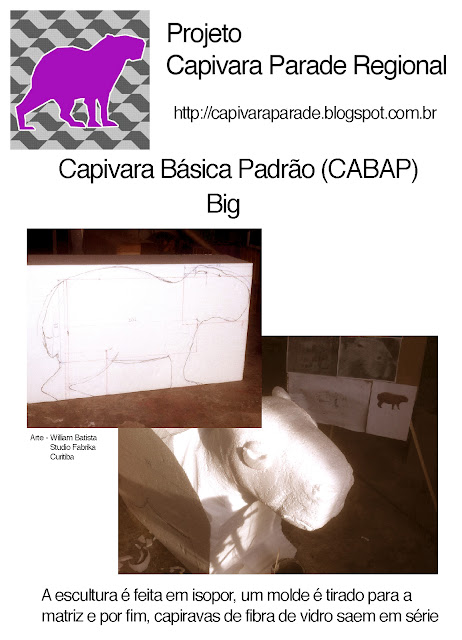 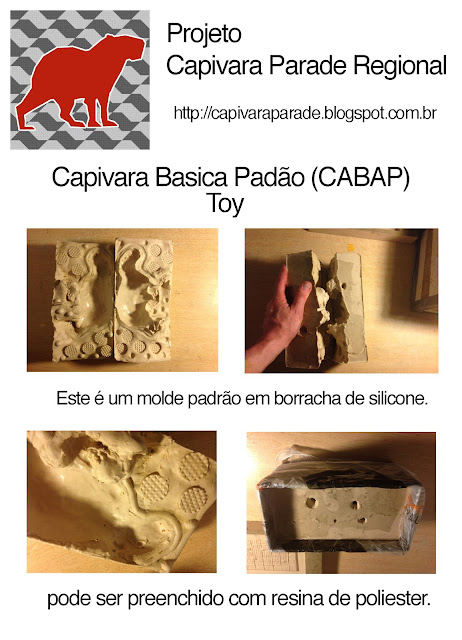 Send us photos of their activities, they will be posted on our channels, Blog and fan page on Facebook.

We hope that, such as capybaras, which arrived by Brazilian banks without much fanfare, we can inspire all cities to rethink the ecology of the river banks and lakes, usually polluted, and bring the hope of having cities in complete balance with nature.

Luiz Pagano
Please let me know what you think about my blogs, write to luizpagano@gmail.com